Garin Tzabar Regba: A Thank You

A year ago, my brother Jonah moved to Israel (in Hebrew termed Aliyah or literally going up because no matter where you are you are ascending towards Israel) and about 3 months later enlisted in the Israeli Defense Forces.  If you have a brother or sister or friend or cousin or anyone that you know who moved to a different country to serve in their army and if you're anything like me then you know the emotional toll that it takes on you.  There are two emotions that take over and compete with each other for attention from your body and soul.  Pride.  Pride that your brother is living his dream.  Pride that he will forever be a role model to you, your children, your nieces and nephews, and your friends.  Pride that he is putting all of his other studies, goals, and aspirations on hold to commit over two years of his life to serving his country- your county.  Pride that he has the courage to talk about doing something since the 10th grade and he stops talking the talk and finally walks the walk.  And then there's fear.  Fear of being away from someone who you spent your whole life with, even two years in college together.  Fear of growing apart.  Fear of his loneliness during the scorching hot days and freezing cold nights while training in the desert and of being so helpless abroad having nothing to offer but sympathy and love over the occasional Skype calls.  Fear that your children won't know his children the same way you have always dreamed about.  Fear that despite the tons of family you have in Israel he will be alone without a family of his own.


None of these feelings are foreign to anyone who has someone close to them serving in the IDF, or any army, nor are these all the emotions captured.  The truth is it would be near impossible to describe what goes through your head during the week of non-stop crying when your best friend moves away.  And there's no way to describe the excitement in those first few months when you get an email or a skype call or the first time you hug that person when you see them in uniform.  These are powerful experiences and unlike Israelis who are raised knowing that they will serve in the army, as did their siblings and parents and grandparents before them, we do not grow up preparing ourselves for these feelings.

Over the last year I have been beyond fortunate to visit Israel twice; the first time to see Jonah's swearing in ceremony at the Kotel (Western Wall), and the second time when I spent 7 weeks in Israel this past summer.  Over these two trips I think I spent a total of eleven days with Jonah, seven of them more or less at Jonah's moshav (best translated into neighborhood community) where he lives in student-type housing with other Americans (now Israelis, too!) who have made Aliyah and enlisted in the army.  He is part of a program called Garin Tzabar and each member of his garin, group of Americans embarking on this journey together, is assigned a host family on the moshav because they are lone soliders and, quite obviously, do not have their parents to do laundry for them, send them back to base with cookies, cut their hair, or cook them meals when they are home.  Jonah's host family is phenomenal.  They adore him, and who wouldn't?!


But what struck me most when I spent those estimated seven days with Jonah on his moshav was not his loving host-family who fed us both with delicious food, ironed his clothes, sewed on buttons to his torn uniform, lent him their car, and talked American Basketball teams with him.  It was his friends, the other 30 or so 20-somethings who embarked on this journey together.  The group that forms the garin is assembled by geographic location in the US so that they can attend seminars together before moving to Israel- Jonah is in a Northeast college aged or post-college group so his friends have had similar life experiences in universities leading up to their move.  These amazing and inspirational people go through experiences I cannot fathom.  The boys and girls all serve in different competitive units and when they come home on weekends, albiet not every weekend, they are exhausted and worn out and just want to sleep.  But instead of crashing and hibernating and rejuvenating themselves for the week or three to come, they get together at 5pm and do a Shabbat Circle where they say the blessings for Shabbat and all go around talking about their weeks.  Even though they mostly talk to each other in English when at home, the Ma'agal Shabbat is all in Hebrew and I was so happy to say the blessing over the challah and speak about my week both times I participated in the circle.

Afterwards everyone relaxes, Sykpes with their parents, and most people have Shabbat dinner with their host families.  At about 10pm, music starts to blast from various rooms, drinks are being made, and the night's plans have been decided, changed, and re-decided three times over.  Eden helps the boys by adjusting their barrets and Arielle is sure to pop in to everyone's room asking specifically about their weeks and checking in in a meaningful way.  You can hear Michal from down the hall as she tries to gauge the dress code for the night because of course, the whole group is going out to let loose for a night off.  Going into hilarious stories of trying to convince an Israeli sherut driver that sat 12 people (A sherut is like a mini van that picks people up on the side of the road and drives them to their destinations as long as they're all in the same direction- in Israel that either means North or South.  Sometimes a sherut will pick up enough people going to the same place that he'll just make a flat rate for the group and drive them directly to their destination.  I LOVED when that happened because it turns into a party-bus atmosphere and you feel special even though it's a pretty normal occurrence.) that he should drive a group of 15 of us going to a dance club over an hour away, other cab drivers taking pictures of our faces because apparently we were being rude and refusing to pay so we needed to be reported to the police...via iphone photos...(really, that happened), girls not being able to decide if they were going to get in the car or not and ultimately deciding to get dropped on the side of the road, and dogs with theoretical rabies are meant for another time.  But understanding how much these young adults function as a family for each other is fundamental to understanding how they make it through day by day, week by week.

Sam can spend an entire car ride talking to Michal about how he wants a girlfriend but no girl has enough spunk to handle him.  Michal will dance up a storm wherever we go and make sure the other girls are having fun with her not stopping until everyone is happy.  Mati won't see Jonah for over 8 weeks because they're never out at the same time but will still leave welcoming notes in the room for him and they are sure to talk regularly to keep each other up to date.  Danny will welcome anyone and everyone visiting for Shabbat with genuine conversation and a love for fun as long as they're wiling to be made fun of  a little by him.  Mattan who is in an amazing unit was told that he had to make a serious decision about continuing in the unit or not because of an injury and turned it around in the best possible way, ultimately hoping that it will place him in a unit with his friends Sam or Jonah from the garin.  Arielle is everyone's big sister and bestfriend, and Amy is always down to have fun and make the most out of the night- including screaming at a driver at 5am to just drive the extra 10 seconds to the correct buildings.  I didn't get to know Tom, Jacob or Jason too well but like everyone else they were just trying to chill with their friends, relax at the pool, and get some quality time in together before going back on base.  Gal's host family and real family got together and invited everyone over for a delicious Shabbat brunch.  Realities hit home when grandparents pass away in the States and the simple fact is these guys are in the army and can't make it home so they do what they can for each other.  They drink some whiskey, eat some schwarma, and talk about their families back home who seem so distant yet they all know exactly who has how many siblings and have probably all met each other's parents on video chats.  And there's more, so much more, that goes on to make sure everyone is taken care of both when they're home and on base for Shabbat. 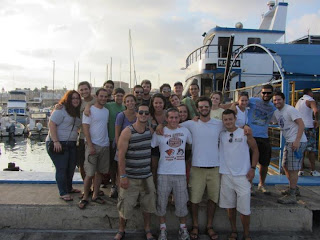 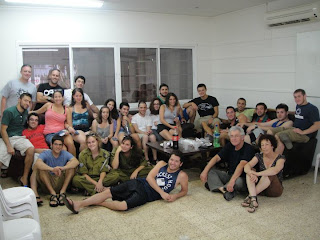 So you get the idea... these guys and girls have become a family.  They laugh with each other and at each other.  They call to check up when someone is on base and they sit freely on each other's beds saying whatever is on their minds.  They go through ups and downs together.  They support each other and love one another as if they have been together their whole lives.  Sahar tagged the entire garin in a photo of a sign on facebook-- the sign said, "Sometimes friends are family, too."  They are not all best friends but they are all family.  They fight and confront each other (that time that Danny wanted to go to a club almost 2 hours away for his birthday and the girls tried to stage an intervention, emphasis on the word tried) but they do it out of love.  And that love, found in their conversations, phone calls, laughter, and dancing has alleviated one of my fears.  Jonah is not in this alone; none of them are.  Maybe his nuclear family who grew up in Natick, MA can't be there all the time, but his Garin Tzabar family can be, has been, and always will be.